skip to main | skip to sidebar

I traveled this summer to Asia including Korea, Taiwan, and Japan to meet "Comfort Women" survivors, and to interview a former Japanese Imperial Army soldier who served during W.W.II and witnessed the "Comfort Women" system first hand. I plan to continue research in Asia next year, to meet Chinese, Dutch, Filipino, and Indonesian survivors.

Subsequently, I will create artworks based on the research, and attempt to bring to light this instance of organized violence against women and to help restore the honor of those who lived through so much.

It has been a great honor to meet these courageous and outspoken "Comfort Women" in Korea and Taiwan, who are helping to keep this important history alive. I look forward to my continued research in Asia. 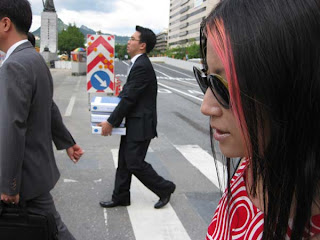 I interviewed 9 Korean "Comfort Women" at Nanumeh-Jip ("The House of Sharing"), and at Shim Toh ("A resting place"). A majority of all "Comfort Women" were Korean, and most did not survive the war and harsh treatment. Of those who did survive, most kept the events a secret because it would be considered shameful and reflect badly on their families. Despite this, over 250 Korean "Comfort Women" came out in the 1990's. Now aged in their 80's and 90's, most of them are in poor health and only 99 surviving women remain.

In order to understand this complicated issue better, I had meetings with many activists, sociologists, historians, and scholars. Among those I interviewed were Professor Jung Oak Yun, and Professor Hyo Chae Lee who are founding and central figures working to bring the "Comfort Women" issue to international attention, and Won Soon Park, Social Designer and Executive Director of The Hope Institute, working for institutional change and social justice in Korea.

I attended a Symposium for the 10th Anniversary of the Comfort Women Museum at Nanumeh-Jip. Historians and activists from Korea, Japan, and U.S.A. gathered to discuss strategies on the "Comfort Women" issue now that United States House of Representatives House Resolution 121 has been passed.

I also visited "The Museum of Japanese Imperial Army's Sexual Slavery" and "The Center for Peace and Human Rights," "The Korean Council for the Women Drafted for Sexual Slavery by Japan," and "War & Women's Rights Museum." 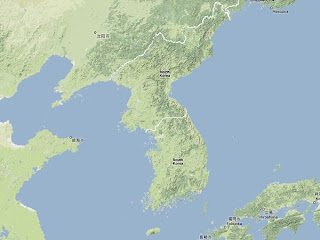 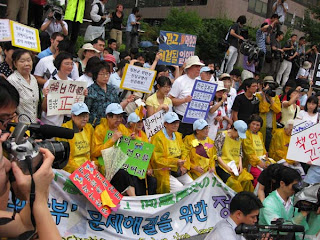 Every Wednesday people, including Korean "comfort women," have gathered since 1992 to protest for justice for these women. 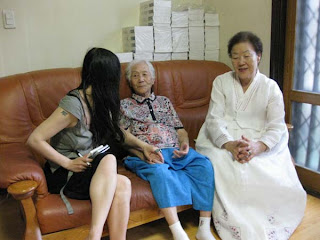 I interviewed 6 Taiwanese "Comfort Women" with diverse backgrounds including Taiwanese, Hakanese, and Aboriginal Taiwanese through valuable help and support from Graceia Lai, Director of International Affairs, Shu-Hue Kang, Deputy Executive Director, and Huiling Wu, Associate Supervisor at The Taipei Women's Rescue Foundation(TWRF). There were by some estimates 2,000 Taiwanese "Comfort Women". 58 women came out in the 1990's. Now, 21 remain.

I stayed as a resident artist at The Bamboo Curtain Studio during my visit to Taipei, and got lots of support from Margaret Tan, the Director, and Ann Yao, the Programme Director who are particularly interested in art focusing on social and environmental concerns.

I met with Yaohua Su, Director of Taipei Artist Village; Rita Chang, Representative and Melissa Chan, Program Associate at The Asian Cultural Council in Taipei; and artists such as Lulu Shur-tzy Hou, Mali Wu, and Betsy Lan to talk about the art world in Taiwan. 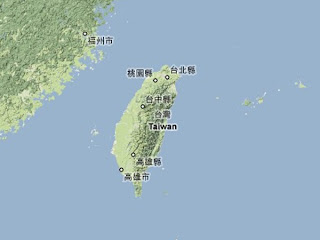 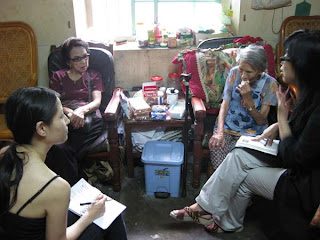 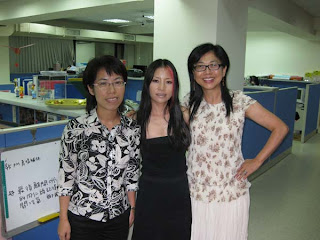 With Graceia Lai and Shu-Hue Kang at The Taipei Women's Rescue Foundation (TWRF)
Posted by Chang-Jin Lee at 7:57 PM No comments:

I had an opportunity to interview Mr. Kaneko, a former Japanese soldier - through Mina Watanabe, Secretary General/Curator, and Alison Scott, a Dutch Canadian assistant at Women's Active Museum (WAM) on War and Peace in Tokyo.

With the help of Georg Kochi, Representative at The Asian Cultural Council in Japan, I stayed at Youkobo Art Space and met Hiroko Murata and Tatsuhiko Murata, Directors. 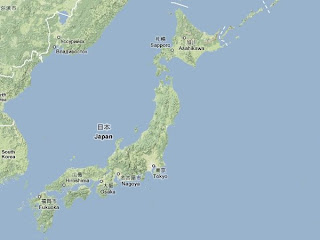 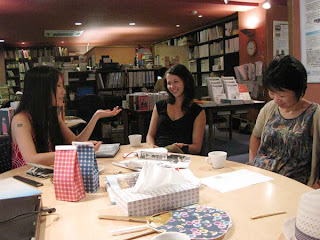 At Women's Active Museum (WAM) on War and Peace in Tokyo
Posted by Chang-Jin Lee at 5:30 PM No comments:

Friday September 5, 2008
Alison Scott, a Dutch Canadian assistant at Women's Active Museum on War and Peace, took me to the home of Mr. Yasuji Kaneko, a former Japanese soldier. Alison's grandmother survived a Japanese concentration camp in Indonesia. (It is estimated that 400 Dutch women were taken as sex slaves during WWII.)
Mr. Kaneko was a soldier of the Imperial Japanese Army during WWII, and came forward in the 90's to speak about war crimes. He had a strong sense of duty to tell what he experienced and witnessed. "So, this kind of violence against women doesn't happen again. War is not good for anybody," he said. 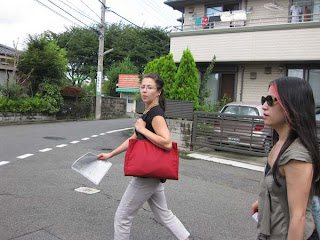 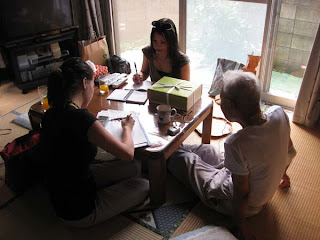 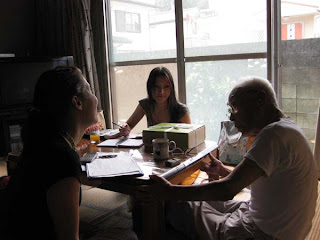 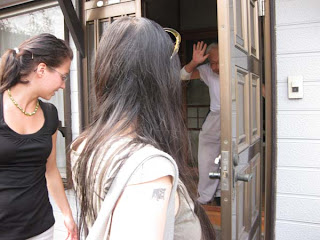 Posted by Chang-Jin Lee at 9:12 PM No comments:

Thursday September 4, 2008
I had a meeting with Mami Kataoka, a curator at Mori Art Museum in the Ropponggi Hills Mori Tower. We talked about my projects, and issues involving "comfort women" and human trafficking.
Posted by Chang-Jin Lee at 9:11 PM 1 comment: 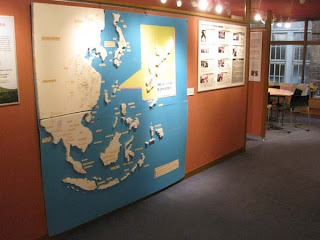 Locations of the "Comfort Stations" in Asia 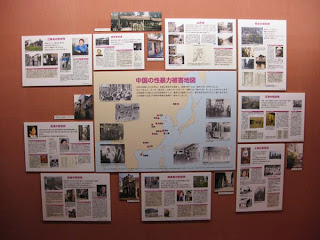 History of the "Comfort Women" 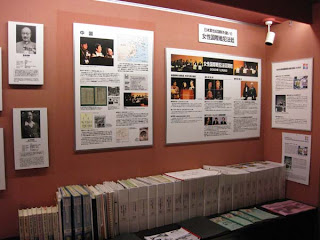 Pictures of high-ranking Japanese officials accused of war crimes, and of "The Women's International War Crimes Tribunal for the Trial of Japanese Military Sexual Slavery" in Tokyo, Japan on December 2000. 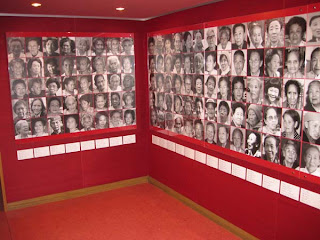 Pictures of "comfort women" at the entrance to WAM
Posted by Chang-Jin Lee at 8:52 PM No comments:

Chang-Jin Lee
I am a New York City based visual artist, conducting research in Asia about the issue of sexual violence against women during wartime, and in particular the case of "Comfort Women." As part of the process of my research, I have traveled to Asia (Korea, Taiwan, Japan, China, Indonesia, Australia, and the Philippines) to meet these women survivors and a former Japanese soldier in order to know more about their particular histories. Subsequently, I have created artworks in the US and overseas based on the research, and am attempting to bring to light this instance of organized violence against women and to help restore the honor of those who lived through so much.